Since 2001, the THS & Pitman WildLink Clubs have been proud to send over 150 students on empowering and educational week-long WildLink expeditions through the rugged and untamed wilderness areas of Yosemite and Sequoia National Parks . With all backpacking gear, meals and lodging provided by WildLink (a branch of NatureBridge), expedition members are given an opportunity to intimately experience the grandeur residing in their own back yard at no cost.  The THS & PHS WildLink Club strives to fulfill the WildLink mission statement: "That the diverse California citizenry is informed, invested and committed to the enduring resource of Wilderness"

Eleven awesome THS students had a pyro-abbreviated backpacking expedition to Little Yosemite Valley. Smoke from the Briceburg Fire became too unhealthy to stay in the backcountry so we were forced out of the backcountry two days early.  But we still had an awesome time and even managed to learn a great deal of biology, geology and hydrology along the way!

2018 Rendition of our Annual Expedition to Yosemite. This was perhaps one of the best overall groups we've ever taken.  They represented the town of Turlock well and will be bringing back immense amounts of wilderness knowledge and community stewardship back home!  Also... THE FIRST 360 GROUP PHOTO!

I'm not quite sure how it's possible, but it seems like each year's expedition gets better and better. The senior-laden trip was one of the best we've have, even with Mr. Kamp destroying his ankle while star gazing. L-R = Maddy, Iven, Mohammad, Jacob, Marlene, Damian, Crystal, Gabby, Liz, Karina, Wali, Adriana.​

It's sometimes hard to rank the many expedition groups that have participated in WildLink.  All are extremely positive, but some stand out a bit more than others due to extenuating circumstances and/or overcoming adversity on the trip.  The 2016 Expedition saw Jannette, Jacob, Elizabeth, Sawyer, Flora, Theo, Trenton, Iven, Wali, Savannah, Karina and Crystal face adversity and win! Their original destination (Ostrander Lake) was changed due to possible snow later in the week.  They helped a group member hobble down the last three miles from Cloud's Rest.  They got into camp at 9pm and then packed-out early on Friday because of a threatening forecast. And they supported each other in ways rarely seen on previous expeditions.  It was all enough to make everyone at THS and PHS proud that they represent our schools.

Six awesome THS students got to team-up with New Leaf High School in Martinez, CA to experience the trip of a lifetime. A late spring snow storm caused the group to re-route the trip and base-camp at Little Yosemite Valley. The students got to explore several burn scars and discovered some cool archeological artifiacts like bottles, cans, etc. Forecast crappy conditions for the last day of their trip gave them the impetus to come out of the wilderness on Thursday instead of risking the JMT in a heavy snowfall.

Juan, Jordan, Natasha, Jazzmin, Dannial, Lizzy, Erika, Jacob, Dino, Isai & Bradley.
This group ventured up Clouds Rest while learning the intricacies of teamwork.  The  group enjoyed the amazing views and learned how to have some grit to get through tough times on the trail.

Jazzmin, Natasha, Brian, Adrianna, Jose, Zack, Dulce, Dino, Ashley, Alejandra, Leo, Kathleen.
﻿Twelve awesome THS students were finally able to thwart a Government shutdown in October, a December snowstorm that derailed an ambassador project and another epic snowstorm in April in the midst of one of California's most severe droughts to conquer the trip of a lifetime. Two feet of snow pretty much kept the crew near the historic cabin in the Merced Grove of Sequoias to learn snow survival skills, have epic snowball fights and get a great history lesson from a park ranger. ﻿

2012: Kings Canyon NP - Paradise Valley
09/23-28/2012
Jose, Isidro, Salvador, Alexia, Cassie, Patty, Dulce, Judit, Xochitl, Kathleen, Rebekah.
Eleven amazing students from Turlock High School ventured into the relatively unknown confines of Kings Canyon National Park and came away with memories for a lifetime. Their 28 mile hike into Paradise Valley allowed them to hug the South Fork Kings River for their entire journey. Judging by exuberant feedback, this was one of the best WildLink Trips of all time.

Twelve great students from THS & PHS got to experience amazing views and amazing weather on a trek through Upper Cathedral Lake and to Sunrise Camp. The group worked together well to summit the foreboding Clouds Rest to gain views that are unmatched in the park!

Twelve awesome students from THS & PHS survived a relatively warm trip to Clouds Rest and Upper Cathedral Lake while also completing some much needed stewardship by removing old campfire scars left on the granites near Upper Cathedral Lake.   Great group, and everyone made it!

The October 2009 WildLink expedition saw a collaborative effort between Turlock & Pitman come to fruition. Ten great students were able to brave subzero wind-chill and 70mph gusts of wind on the first night of their trip to successfully complete their Tenaya Lake – Clouds Rest – Little Yosemite Valley – Curry Village trek. Seldom has there been an expedition that experienced frigid temps so low that soap, iodine & bottles of water froze – IN THE TENT! Wednesday & Thursday warmed-up and allowed the participants to take a stab at Cloud’s rest from the difficult western approach. They made it and were rewarded with views and camaraderie to last a lifetime.

Mrs Bloom, Mrs Hollister & I had to give up yet another three days to take eight great kids up to Yosemite to experience another great expedition.  This year's expedition ran from Lembert Dome in Tuolumne Meadows all the way to Mount Hoffman and May Lake.  Take a look at the pre-trip photos to see what the kids did to prepare for their trip.

Alejandra, Charmaine, Cody, Diana, Felipe, Jose, Laura, Nathan, Tristian
I had the pleasure of taking nine students on a grueling backpacking trip hosted by Stephanie Strickland & SEKI WildLink into the heart of Sequoia National Park. After an initial night of rain and fairly strenuous hike in, the weekend weather was gorgeous and allowed us to explore and exist in relative comfort. I was lucky enough to catch a golden trout in the East Fork of Clover Creek, which surprised the heck out of me (and probably the fish too)! There are a LOT of photos here, but they tell the complete story. 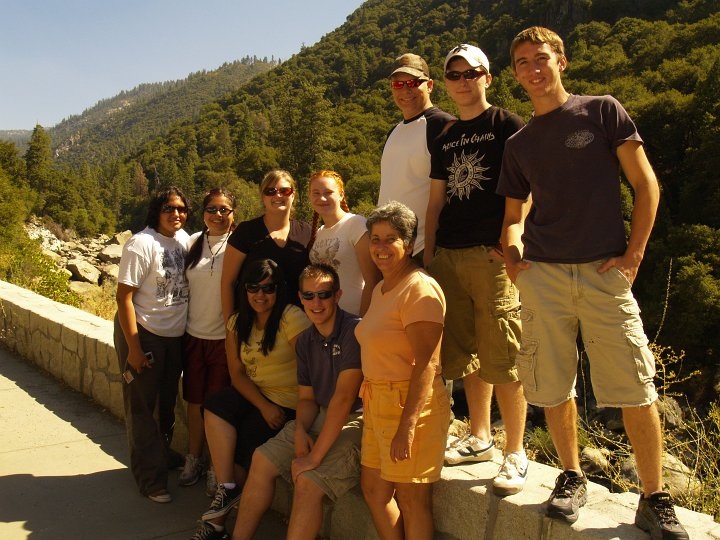 Alec, Amada, Analilia, Charmaine, Diana, Jonathan, Kellie, Michael, Randy, Ryan, Staci
Mrs Bloom, Mrs Hollister & I got to take another eleven great kids to Yosemite Valley. The eleven participants had a great long excursion with perfect weather up and over Clouds Rest and to Yosemite Valley over four nights.

Bryce, Edgar, Jesse, Kara, Kellie, Kevin, Leith, Meghan, Michael, Sara, Scott
Twelve intrepid students from THS (and one from Pitman...) went on an amazing hike through the redwoods and sequoias of Sequoia National Park. Mr. Silva and Gretchen Eisenhut had a wonderful time chaperoning the hike and no one was eaten by bears-  a big plus for any backpacking trip.  ﻿We were blessed with wonderful weather and blooming dogwoods as we traveled through Redwood Canyon which boasts the largest grove of sequoias.  The first day of walking was on the Hart tree loop where we explored the life of sequoias and used our amazing math skills to estimate the size of the Hart tree. Many small creeks provided us with water and beautiful scenery, and a fallen giant sequoia provided us with a path across one of these creeks.﻿

Anthony, Austin, Bryce, Cody, Crystal, Domenick, Jarae, Kevin, Leith, Lela, Michael, Natalie, Sara.
This was the first WildLink expedition that I had the opportunity to work with.  The kids were wonderful and they had an amazing hike from Sunrise High Sierra Camp, up to Cloud's Rest, down through Yosemite Valley and back to Curry Village.
5050220